Starting from v1.1 of thisÂ WordPress plugin you can easily track some popular media players embedded into your website. And not just that: remember, Google Tag Manager is not just about collecting data using Google Analytics! Lets imagine you can create a remarketing list on Facebook which collects views of your videos on your website. Fascinating, isn’t it? 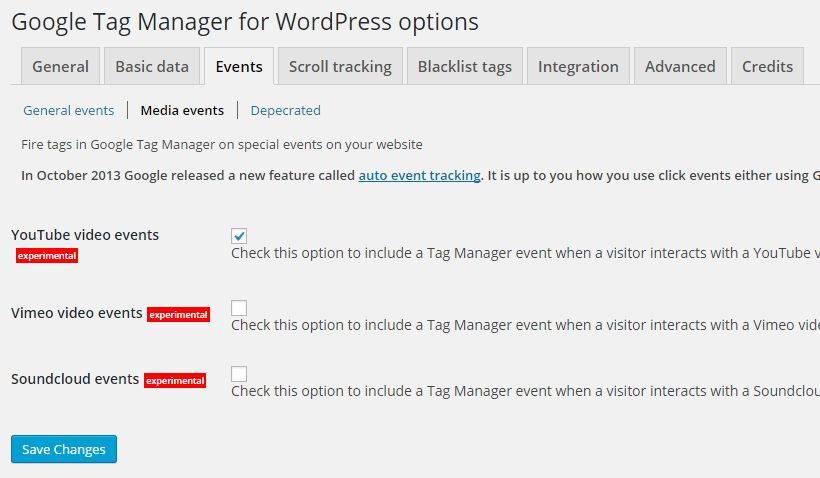 The main goalÂ while creating this feature was to create unified dataLayer variables and events among all currently supported media players:

This was hard since besides some common events there are many different kind of events which are available in one media player but not in another. We created this article to make things clear and to provide a detailed documentation about how the plugin works with this feature.

Please remember: this is an experimental feature which means it can still have negative side effect on your site and also names of data layer variables and events can change in upcoming versions of the plugin.

Data Layer variables for all events

The following dataLayer variables are available in all implemented data layer events so that you can track details about the currently played media:

Lets explain what you can enter into the ‘Data Layer variable name’ field in the Google Tag Manager UI while you try to read the data layer and what you can expect to see when you are using this variable:

So if you need any of the above data you just have to create a new Data Layer Variable on the GTM UI and add the variables names in bold.

There are several events that you can use to fire triggers in your Google Tag Manager setup. Many of them are common between media players so that you can create only a few tags to track any kind of players:

Download the latest version of my Google Tag Manager plugin for WordPress and start using advanced GTM on your website without coding!

Do you want to contribute to the source code?

Visit the GitHub repo of the plugin

This website may use cookies to remember your log-in details, to optimize site functionality for your use, and deliver marketing based on your interests.

This does not include collecting any personal data of you. In any case we need to process any of your personal data, we will ask for your specific consent later for sure.

Accepting this message only means that we will be able to analyze site content performance using larger buckets of users and to deliver tailored messages to those user buckets. We will be not able to analyze your activity alone especially not in a way where your name or any personal data of you is attached to this analysis.

To read our privacy policy, please visit our privacy page.
Necessary Always Enabled
This is an necessary category.
Statistical
Tracking of website usage without using any feature that would involve personal data processing either by us or by our tracking vendor. This includes IP address anonymization and disabling features related to interest based advertising.
Advertising
Tracking codes that could be used to tailor our messages based on your interests. This does not mean that we will be able to track your activities alone especially not in a way that would allow us to connect your name or other personal data to your website activities.
Save & Accept